New titles on our shelves this week!

New Releases for the Week of 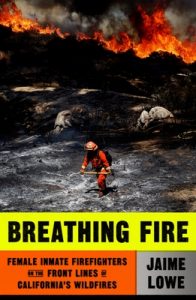 A dramatic, revelatory account of the female inmate firefighters who battle California wildfires.

Shawna was overcome by the claustrophobia, the heat, the smoke, the fire, all just down the canyon and up the ravine. She was feeling the adrenaline, but also the terror of doing something for the first time. She knew how to run with a backpack; they had trained her physically. But that’s not training for flames. That’s not live fire.

California’s fire season gets hotter, longer, and more extreme every year — fire season is now year-round. Of the thousands of firefighters who battle California’s blazes every year, roughly 30 percent of the on-the-ground wildland crews are inmates earning a dollar an hour. Approximately 200 of those firefighters are women serving on all-female crews.

In Breathing Fire, Jaime Lowe expands on her revelatory work for The New York Times Magazine. She has spent years getting to know dozens of women who have participated in the fire camp program and spoken to captains, family and friends, correctional officers, and camp commanders. The result is a rare, illuminating look at how the fire camps actually operate — a story that encompasses California’s underlying catastrophes of climate change, economic disparity, and historical injustice, but also draws on deeply personal histories, relationships, desires, frustrations, and the emotional and physical intensity of firefighting.

Lowe’s reporting is a groundbreaking investigation of the prison system, and an intimate portrayal of the women of California’s Correctional Camps who put their lives on the line, while imprisoned, to save a state in peril. 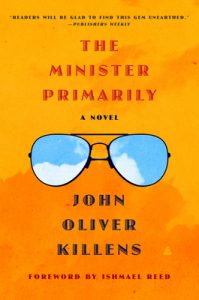 The Minister Primarily: A Novel

Wanderlust has taken Jimmy Jay Leander Johnson on numerous adventures, from Mississippi to Washington D.C., Vietnam, London and eventually to Africa, to the fictitious Independent People’s Democratic Republic of Guanaya, where the young musician hopes to “find himself.”

But this small sliver of a country in West Africa, recently freed from British colonial rule, is thrown into turmoil with the discovery of cobanium—a radioactive mineral 500 times more powerful than uranium, making it irresistible for greedy speculators, grifters, and charlatans. Overnight, outsiders descend upon the sleepy capital city looking for “a piece of the action.”

When a plot to assassinate Guanaya’s leader is discovered, Jimmy Jay—a dead ringer for the Prime Minister—is enlisted in a counter scheme to foil the would-be coup. He will travel to America with half of Guanaya’s cabinet ministers to meet with the President of the United States and address the UN General Assembly, while the rest of the cabinet will remain in Guanaya with the real Prime Minister.

What could go wrong?

Set in the 1980s, this smart, funny, dazzlingly brilliant novel is a literary delight—and the final gift from an American literary legend. 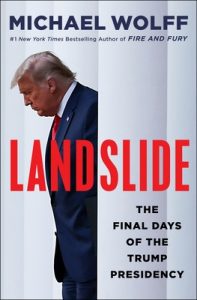 Landslide: The Final Days of the Trump Presidency

We all witnessed some of the most shocking and confounding political events of our lifetime: the careening last stage of Donald J. Trump’s reelection campaign, the president’s audacious election challenge, the harrowing mayhem of January 6, the buffoonery of the second impeachment trial. But what was really going on in the inner sanctum of the White House during these calamitous events? What did the president and his dwindling cadre of loyalists actually believe? And what were they planning?

Michael Wolff pulled back the curtain on the Trump presidency with his #1 bestselling blockbuster Fire and Fury. Now, in Landslide, he closes the door on the presidency with a final, astonishingly candid account.

Wolff embedded himself in the White House in 2017 and gave us a vivid picture of the chaos that had descended on Washington. Almost four years later, Wolff finds the Oval Office even more chaotic and bizarre, a kind of Star Wars bar scene. At all times of the day, Trump, behind the Resolute desk, is surrounded by schemers and unqualified sycophants who spoon-feed him the “alternative facts” he hungers to hear—about COVID-19, Black Lives Matter protests, and, most of all, his chance of winning reelection. Once again, Wolff has gotten top-level access and takes us front row as Trump’s circle of plotters whittles down to the most enabling and the president reaches beyond the bounds of democracy as he entertains the idea of martial law and balks at calling off the insurrectionist mob that threatens the institution of democracy itself.

As the Trump presidency’s hold over the country spiraled out of control, an untold and human account of desperation, duplicity, and delusion was unfolding within the West Wing. Landslide is that story as only Michael Wolff can tell it. 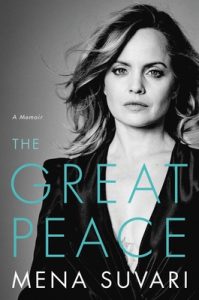 The Great Peace: A Memoir

The Great Peace is a harrowing, heartbreaking coming-of-age story set in Hollywood, in which young teenage model-turned-actor Mena Suvari lost herself to sex, drugs and bad, often abusive relationships even as blockbuster movies made her famous. It’s about growing up in the 90s, with a soundtrack ranging from The Doors to Deee-Lite, fashion from denim to day-glo, and a woman dealing with the lasting psychological scars of abuse, yet knowing deep inside she desires so much more from life.

Within these vulnerable pages, Mena not only reveals her own mistakes, but also the lessons she learned and her efforts to understand and grow rather than casting blame. As such, she makes this a timeless story of girl empowerment and redemption, of somebody using their voice to rediscover their past, seek redemption, and to understand their mistakes, and ultimately come to terms with their power as an individual to find a way and a will to live—and thrive. Poignant, intimate, and powerful, this book will resonate with anyone who has found themselves lost in the darkness, thinking there’s no way out. Ultimately, Mena’s story proves that, no matter how hopeless it may seem, there’s always a light at the end. 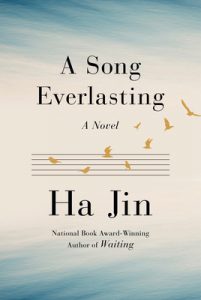 From the universally admired, National Book Award-winning, bestselling author of Waiting–a timely novel that follows a famous Chinese singer severed from his country, as he works to find his way in the United States

At the end of a U.S. tour with his state-supported choir, popular singer Yao Tian takes a private gig in New York to pick up some extra cash for his daughter’s tuition fund, but the consequences of his choice spiral out of control. On his return to China, Tian is informed that the sponsors of the event were supporters of Taiwan’s secession, and that he must deliver a formal self-criticism. When he is asked to forfeit his passport to his employer, Tian impulsively decides instead to return to New York to protest the government’s threat to his artistic integrity.

With the help of his old friend Yabin, Tian’s career begins to flourish in the United States. But he is soon placed on a Chinese gov­ernment blacklist and thwarted by the state at every turn, and it becomes increasingly clear that he may never return to China unless he denounces the freedoms that have made his new life possible. Tian nevertheless insists on his identity as a performer, refusing to give up his art. Moving, important, and strikingly relevant to our times, A Song Everlasting is a story of hope in the face of hardship from one of our most celebrated authors. 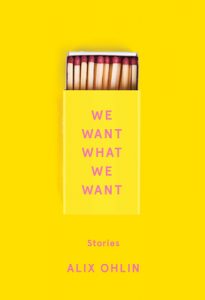 We Want What We Want: Stories

An Esquire Best Book of Summer – A collection of glittering, surprising, darkly funny stories of people testing the boundaries of their lives–from the award-winning author of Dual Citizens, who is spoken of in the same reverent breath as Lorrie Moore and Joy Williams (Heidi Julavits, author of The Folded Clock).

In the mordantly funny Money, Geography, Youth, Vanessa arrives home from a gap year volunteering in Ghana to find that her father is engaged to her childhood best friend. Unable to reconcile the girl she went to dances with in the eighth grade and the woman in her father’s bed, Vanessa turns to a different old friendship for her own, unique diversion.

In the subversive The Brooks Brothers Guru, Amanda drives to upstate New York to rescue her gawky cousin from a cult, only to discover clean-cut, well-dressed men living in a beautiful home, discussing the classics, and drinking sophisticated cocktails, moving her to wonder what freedoms she might willingly trade away for a life of such elegant comfort.

And in The Universal Particular, Tamar welcomes her husband’s young stepcousin into their home, imagining they are saving this young woman from Somalia by way of Stockholm, only to find their cool suburban life of potlucks and air-conditioning knocked askew in ways they cannot quite understand.

Populated with imperfect families, burned potential, and inescapable old flames, the thirteen stories in We Want What We Want are, each one, diamond-sharp–sparkling with pain, humor, and beauty. 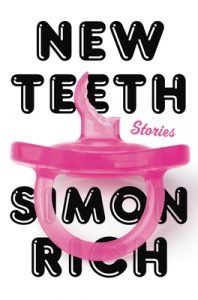 Laugh till you cry in this new collection of stories from the award-winning “Serena Williams of humor writing” (New York Times Book Review) about raising babies and trying  not to be one.

Called a “comedic Godsend” by Conan O’Brien and “the Stephen King of comedy writing” by John Mulaney, Simon Rich is back with New Teeth, his funniest and most personal collection yet.

Two murderous pirates find a child stowaway on board and attempt to balance pillaging with co-parenting. A woman raised by wolves prepares for her parents’ annual Thanksgiving visit. An aging mutant superhero is forced to learn humility when the mayor kicks him upstairs to a desk job. And in the hard-boiled caper “The Big Nap,” a weary two-year-old detective struggles to make sense of “a world gone mad.”

Equal parts silly and sincere, New Teeth is an ode to growing up, growing older, and what it means to make a family. 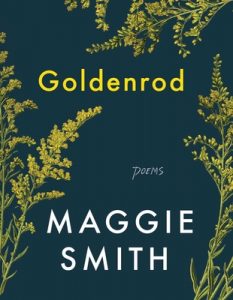 “To read Maggie Smith is to embrace the achingly precious beauty of the present moment.” —Time

From the award-winning poet and bestselling author of Keep Moving and Good Bones, a stunning poetry collection that celebrates the beauty and messiness of life.

With her breakout bestseller Keep Moving, Maggie Smith captured the nation with her “meditations on kindness and hope” (NPR). Now, with Goldenrod, the award-winning poet returns with a powerful collection of poems that look at parenthood, solitude, love, and memory. Pulling objects from everyday life—a hallway mirror, a rock found in her son’s pocket, a field of goldenrods at the side of the road—she reveals the magic of the present moment. Only Maggie Smith could turn an autocorrect mistake into a line of poetry, musing that her phone “doesn’t observe / the high holidays, autocorrecting / shana tova to shaman tobacco, / Rosh Hashanah to rose has hands.”​

Slate called Smith’s “superpower as a writer” her “ability to find the perfect concrete metaphor for inchoate human emotions and explore it with empathy and honesty.” The poems in Goldenrod celebrate the contours of daily life, explore and delight in the space between thought and experience, and remind us that we decide what is beautiful. 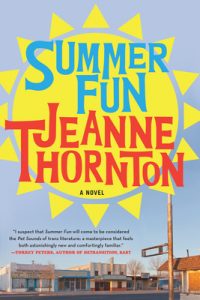 Gala, a young trans woman, works at a hostel in Truth or Consequences, New Mexico. She is obsessed with the Get Happies, the quintessential 1960s Californian band, helmed by its resident genius, B—-. Gala needs to know: Why did the band stop making music? Why did they never release their rumored album, Summer Fun?

And so she writes letters to B—- that shed light not only on the Get Happies, but paint an extraordinary portrait of Gala. The parallel narratives of B—- and Gala form a dialogue about creation—of music, identity, self, culture, and counterculture.

Summer Fun is a brilliant and magical work of trans literature that marks Thornton as one of our most exciting and original novelists.