“Precarious Crossings offers a vital account of a multilingual Atlantic under neoliberalism. With insight and originality, Perisic reads transatlantic immigrant fiction as moving within and beyond the Black Atlantic to show how contemporary novel forms conceptualize global conditions of precarity.” —Angela Naimou

With global debt, labor, and environmental crises on the rise, the precarious position of people in the Global South has become a significant force moving people across countries, continents, and around the world. Through a comparative study of contemporary trans-Atlantic immigrant narratives in French, Spanish, and English, Alexandra Perisic offers an account of a multilingual Atlantic under neoliberalism. More specifically, Precarious Crossings: Immigration, Neoliberalism, and the Atlantic examines how contemporary authors from the Caribbean, Sub-Saharan Africa, and Latin America—including Roberto Bolaño, Giannina Braschi, Maryse Condé, Fatou Diome, Marie Ndiaye, and Caryl Phillips, among others—have reconceptualized the Atlantic from a triangular space into a multipolar one, introducing new destinations for contemporary immigrants and establishing new Atlantic connections.

Perisic argues that in traveling beyond the postcolonial route that connects former colonizer and former colonized, these authors also shift their focus from cultural difference and national belonging to precarity—a condition characterized by a lack of economic and social stability and protection—as a shared characteristic under global neoliberalization. She demonstrates how contemporary Atlantic narratives reveal the contradictions inherent in neoliberalism as an ideology—thereby showing how they further participate in Atlantic literary and cultural dialogues and push against literary conventions of various genre as they explore the complexities of a globalized Atlantic. 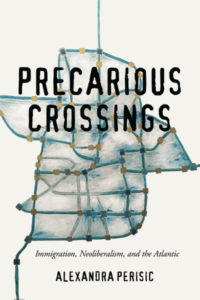 ALEXANDRA PERISIC is Assistant Professor at the University of Miami.