An Afternoon with Steve Leveen

In conversation with Calvin Sims

America’s Bilingual Century: How Americans Are Giving the Gift of Bilingualism to Themselves, Their Loved Ones, and Their Country

Imagine an America where kids have even more chance for success thanks to their dual language schools. Where businesses gain an edge globally because they can literally speak their customers’ language. Where lifelong learners can become more than tourists in other countries and finely hone their brainpower.

More than just imagining such a country, Steve Leveen has discovered that this is the America we are becoming. We are growing into our rich language heritage—one of the richest, in fact, in the world.

America’s Bilingual Century is the result of 12 years of research, including hundreds of interviews that Steve had with leading language scholars as well as bilinguals of all ages and backgrounds. The book is also the result of Steve’s own journey to bilingualism.

You need not be bilingual to enjoy this book. But you may well be excited about such a prospect by the time you finish it. And encouraged about America’s prospects for a stronger and healthier nation, as a country that believes in bilingualism.

Because, as Steve discovers, “English is what unites us; our other languages are what define and strengthen us.” 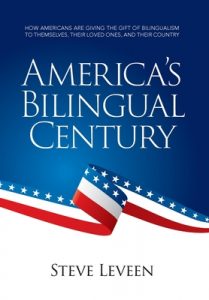 Steve Leveen devoted his first career to celebrating literacy, cofounding the first company in America to create products for readers (Levenger) and serving on the board of the National Book Foundation. He is now dedicating his encore career to biliteracy, championing bilingualism in America as a path to a stronger and healthier nation. A monolingual until midlife, Steve has chosen Spanish as his adopted language and is an avid learner. Steve divides his time between South Florida, where he successfully practices his Spanish, and Maine, where he is somewhat less successful in sounding like a local. America’s Bilingual Century is his third book. He holds a PhD in Sociology from Cornell University.

Calvin Sims is Executive Vice President of Standards and Practices for CNN Worldwide. He assumed the role in 2020 after serving as President and CEO of International House in New York City, which prepares graduate students from more than 100 countries for positions as world leaders. Before that he was a program officer for the Ford Foundation. A 1985 graduate of Yale, Calvin worked at The New York Times for 20 years in various journalistic capacities. As the Times’s foreign correspondent, he lived in Buenos Aires, Tokyo, Seoul and Jakarta, and became bilingual in both Spanish and Japanese. Calvin has served as a trustee of, among other organizations, the Overseas Press Club, the National Book Foundation and the Harlem Educational Activities Fund.