“These precise and honest lines chart how their queer speaker measures and crosses water in all its incarnations. Myth and memory intertwine to reveal both chasm and connection. In this dissonance, the discomfort of being a continent slowly ripping apart and reforming, Wade exposes new lyric heights pushed up from the grit and magma of realizing ‘impeccable geotropic design.’ This collection teaches how to thrive while wading the heartwaters; how to bear living.”—Rajiv Mohabir

When her Florida apartment is damaged by the ferocity of Hurricane Irma, Duhamel turns to Dante and terza rima, reconstructing the form into the long poem “Terza Irma.” Throughout the book she investigates our near-catastrophic ecological and political moment, hyperaware of her own complicity, resistance, and agency. She writes odes to her favorite uncle—who was “green” before it was a hashtag—and Mother Nature via a retro margarine commercial. She writes letters to her failing memory as well as to America’s amnesia. With fear of the water below and a burglar who enters through her second story window, she bravely faces the story under the story, the second story we often neglect to tell.

UNDERSEA is Seaton’s free-wheeling series of love notes to her transplanted sea-struck self and her salty sidekick—poems that celebrate her signature wit and joy in that wild state of mind called Florida. 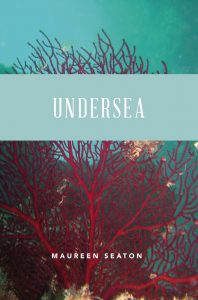 Julie Marie Wade was born in Seattle in 1979. She went to school for a very long time. At some point, she knew she wanted to stay in school forever, so she became a professor. Now she teaches poetry, memoir, lyric essay, and hybrid forms at Florida International University in Miami. She is married to Angie Griffin.

Denise Duhamel is a distinguished university professor in the MFA program at Florida International University in Miami. Her previous books include Scald, Blowout, Ka-Ching!, Two and Two, Queen for a Day: Selected and New Poems, The Star-Spangled Banner, and Kinky. She is a recipient of fellowships from the Guggenheim Foundation and the National Endowment for the Arts.

Maureen Seaton is an award-winning poet whose solo and collaborative collections include Fibonacci Batman, Furious Cooking, Venus Examines Her Breast, Caprice (with Denise Duhamel), Stealth (with Samuel Ace), Sinéad O’Connor and Her Coat of a Thousand Bluebirds (with Neil de la Flor), and Two Thieves and a Liar (with Neil de la Flor and Kristine Snodgrass). She is a professor of English at the University of Miami, where she teaches creative writing.