Andrei Kozyrev was foreign minister of Russia under President Boris Yeltsin from August 1991 to January 1996. During the August 1991 coup attempt against Mikhail Gorbachev, he was present when tanks moved in to seize the Russian White House, where Boris Yeltsin famously stood on a tank to address the crowd assembled. He then departed to Paris to muster international support and, if needed, to form a Russian government-in-exile. He participated in the negotiations at Brezhnev’s former hunting lodge in Belazheva, Belarus where the leaders of Russia, Ukraine, and Belarus agreed to secede from the Soviet Union and form a Commonwealth of Independent States. Kozyrev’s pro-Western orientation made him an increasingly unpopular figure in Russia as Russia’s spiraling economy and the emergence of ultra-wealthy oligarchs soured ordinary Russians on Western ideas of democracy and market capitalism.

The Firebird takes the reader into the corridors of power to provide a startling eyewitness account of the collapse of the Soviet Union, the struggle to create a democratic Russia in its place, and how the promise of a better future led to the tragic outcome that changed our world forever. 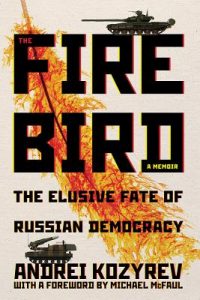 Andrei Kozyrev left office in 1996 after successfully running for a seat in the Russian parliament. After serving one term, during which he continued to argue for closer engagement with the West, he retired from political life and pursued a career in business. He lives in Miami, Florida.