Andy and Terry live in a 117-story treehouse. (It used to be a 104-story treehouse, but it just keeps growing!) It now has a pajama-party room, a water-ski park filled with flesh-eating piranhas, an Underpants Museum, a giant-fighting-robot arena, and the Door of Doom (don’t open it or you’ll be COMPLETELY and UTTERLY DOOMED!).

For as long as Andy and Terry have been writing books together, Andy has always been the narrator and Terry has always been the illustrator. But when Terry tries to prove that he can narrate as well as draw, the story goes completely out of control and the Story Police arrive to arrest the whole treehouse team for crimes against storytelling! Andy, Terry and Jill go on the run, but how long can they evade the Story Police and stay out of Story Jail? 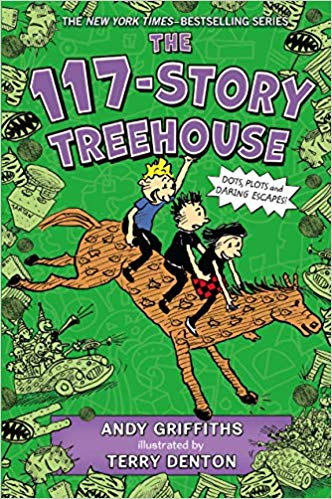 New York Times-bestselling author Andy Griffiths, who wrote the Treehouse series, Killer Koalas From Outer Space, The Big Fat Cow That Goes Kapow, The Cat on the Mat Is Flat, and The Day My Butt Went Psycho! is at his best in these wild storytelling adventures, perfect for readers of all ages.

Praise for Andy Griffiths and the Treehouse series:

“Will appeal to fans of Jeff Kinney and Dav Pilkey. . . . The wonderfully random slapstick humor is tailor-made for reluctant readers. . . . A treat for all.” ―Booklist on The 13-Story Treehouse