Julius Caesar’s conquests in Gaul in the 50s BC were bloody, but the cultural revolution they brought in their wake forever transformed the ancient Celtic culture of that country. After Caesar, the Gauls exchanged their tribal quarrels for Roman values and acquired the paraphernalia of civilized urban life. The Romans also left behind a legacy of language, literature, law, government, religion, architecture, and industry.

Each chapter of Caesar’s Footprints is dedicated to a specific journey of exploration through Roman Gaul. From the amphitheatres of Arles and Nîmes to the battlefield of Châlons (where Flavius Aetius defeated Attila the Hun) Bijan Omani—an exciting and authoritative new voice in Roman history—explores archaeological sites, artifacts, and landscapes to reveal how the imprint of Roman culture shaped Celtic France—and thereby helped to create modern Europe. 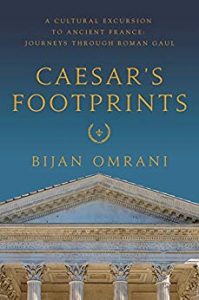 Bijan Omrani attended Lincoln College, Oxford. His first book, Ticking Tom and the Tornado, was published when he was 10 years old, which he followed with contributions to The Spectator as an undergraduate. His research interests include Euripides, mysticism, Henry Purcell and the history of the Afghan-Pakistan frontier. He is the author and editor of various works on Central Asia including Asia Overland: Tales of Travel on the Trans-Siberian and Silk Road (Odyssey Books & Guides), and also a Fellow of the Royal Asiatic Society and the Royal Geographical Society. He teaches Classics at Westminster School.