Art meets today’s political debate over immigration in this beautifully illustrated exploration of Nicario Jiménez Quispe’s retablos. This full-color book offers a unique depiction of the current immigration debate through the lens of renowned Peruvian artist Nicario Jiménez Quispe, himself an immigrant to the United States. An internationally recognized folk artist, Jiménez creates work that powerfully encapsulates the struggles, possibilities, and tragedies of immigration from the Global South to North America. A decorative box with figures in the interior, a retablo traditionally was used to pay homage to certain saints in Peru. In Spain, they were used as portable altars for itinerant priests who carried them to perform mass in remote areas. In the Andes, the retablo became a sort of magical-religious box designed to increase fertility among animals that served as a means of exchange in a cash-free, rural environment. The authors, leading historians of Latin America, contextualize Jiménez’s compelling art to offer creative new insights on the bitter immigration disputes that are dividing our nation. 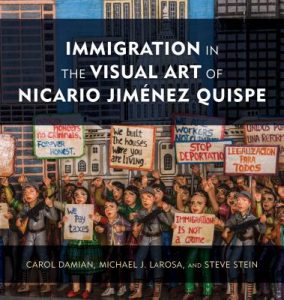 STEVE STEIN is Professor Emeritus of History at the University of Miami.