An Afternoon with Nikki Moustaki

In conversation with Richard Blanco and Caridad Moro-Gronlier

In this bold debut collection, Nikki Moustaki explores femininity in contexts that grapple with violence, mental illness, loss, love, and relationships. She investigates these themes through a variety of provocative narratives, settings, and forms: from a prose poem about a gun shop owner ranting about the Second Amendment, to more intimate lyrical poems, to the intense stamina of three long poems that anchor the book in three striking and imaginative settings–the disintegration of an abusive relationship in a backdrop of often-surreally connected narratives; diary-like entries featuring three generations of superstitious women living without men in a strange world of their own creation; and a dressmaker trying to make sense of his changing world while dealing with his ill wife. This nuanced work is intense and articulate, crafted largely by shattering traditional poetic elements, creating new forms, and driving language that never surrenders. 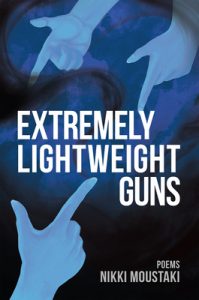 Nikki Moustaki, author of the memoir The Bird Market of Paris, holds an MA in poetry from New York University, an MFA in poetry from Indiana University, and an MFA in fictionfrom New York University.  She is the recipient of a National Endowment for the Arts grant in poetry, alongwith many other national writing awards. Her poetry, fiction, and essays have appeared in various newspapers and literary magazines, anthologies, and college textbooks, including the New York Times, Good Housekeeping, Publishers Weekly, the Village Voice, and the Miami Herald, and her work has been featured in Glamour. O, the Oprah Magazine; and Elle, and on NPR. She is the author of The Complete Idiot’s Guide to Writing Poetry and the poetry collection Extremely Lightweight Guns.

Caridad Moro-Gronlier is the author ofTortillera (Texas Review Press, 2021) and the chapbook Visionware (Finishing Line Press 2009). She is a Contributing Editor of Grabbed: Writers Respond to Sexual Assault (Beacon Press 2020) and Associate Editor for SWWIM Every Day. Moro-Gronlier is the recipient of an Elizabeth George Foundation Grant and a Florida Individual Artist Fellowship in poetry. Her work has been nominated for three Pushcart Prizes, The Best of the Net and two Lambda Literary Awards. Her recent work can be found at The Best American Poetry Blog, West Trestle Review, Literary Mama, The Sextant Review, Limp Wrist Review and others. A career educator, she is an English professor at FIU and MDC in Miami, FL where she resides with her wife and son.

Selected by President Obama as the fifth Presidential Inaugural Poet in U.S. history, Richard Blanco is the first Latinx, immigrant, and gay person to serve in such a role. Born in Madrid to Cuban exile parents and raised in Miami, the negotiation of cultural identity characterizes his many collections of award-winning poetry, including his most recent, HOW TO LOVE A COUNTRY, which interrogates the American narrative and sociopolitical matters of immigration, race, sexuality, and more. He has also authored the memoirs FOR ALL OF US, ONE TODAY: AN INAUGURAL POET’S JOURNEY and THE PRINCE OF LOS COCUYOS: A MIAMI CHILDHOOD.  Blanco is a Woodrow Wilson Fellow, has received numerous honorary doctorates, serves as Education Ambassador for The Academy of American Poets, and is an Associate Professor at Florida International University.