From the author of Make Your Home Among Strangers, essays on being an “accidental” American―an incisive look at the edges of identity for a woman of color in a society centered on whiteness

In this sharp and candid collection of essays, critically acclaimed writer and first-generation American Jennine Capó Crucet explores the condition of finding herself a stranger in the country where she was born. Raised in Miami and the daughter of Cuban refugees, Crucet examines the political and personal contours of American identity and the physical places where those contours find themselves smashed: be it a rodeo town in Nebraska, a university campus in upstate New York, or Disney World in Florida. Crucet illuminates how she came to see her exclusion from aspects of the theoretical American Dream, despite her family’s attempts to fit in with white American culture―beginning with their ill-fated plan to name her after the winner of the Miss America pageant.

In prose that is both fearless and slyly humorous, My Time Among the Whites examines the sometimes hopeful, sometimes deeply flawed ways in which many Americans have learned to adapt, exist, and―in the face of all signals saying otherwise―perhaps even thrive in a country that never imagined them here.

Conversation will be moderated by Chantel Acevedo 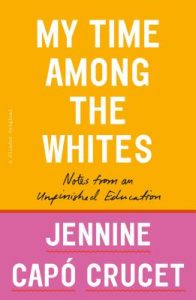 JENNINE CAPÓ CRUCET is the Miami-born author of the novel Make Your Home Among Strangers, a New York Times Editors’ Choice book, and winner of the 2016 International Latino Book Award; and the story collection How to Leave Hialeah, which won the Iowa Short Fiction Prize and the John Gardner Book Award. She is a Contributing Opinion Writer for The New York Times and an associate professor at the University of Nebraska in the Department of English and the Institute for Ethnic Studies.

CHANTEL ACEVEDO is the author of  Love and Ghost Letters (St. Martin’s Press), winner of the Latino International Book Award; A Falling Star (Carolina Wren Press), winner of the Doris Bakwin Award, The Distant Marvels (Europa Editions), which was a finalist for the 2016 Andrew Carnegie Medal for Excellence in Fiction, and most recently, The Living Infinite(Europa Editions), hailed by Booklist as a “vivid and enthralling tale of love and redemption.” Her essays have appeared in Vogue and Real Simple, among others. MUSE SQUAD: THE CASSANDRA CURSE, is Acevedo’s new middle grade series forthcoming from Balzer + Bray. She is Professor of English at the University of Miami, where she directs the MFA program.