How do Caribbean writers see the British countryside?  Do they feel included, ignored, marginalized?   In Topographies of Caribbean Writing, Race, and the British Countryside, Joanna Johnson shows how writers like Derek Walcott, V.S. Naipaul, Jean Rhys, Grace Nichols, Andrea Levy, and Caryl Phillips have very different and unexpected responses to this rural space.  Johnson demonstrates how Caribbean writing shows greater complexity and wider significance than accounts and understandings of the British countryside have traditionally admitted; at the same time, close examination of these works illustrates that complexity and ambiguity remain an essential part of these authors’ relationships with the British countrysides of their colonial or postcolonial imaginations. This study examines accepted norms and raises questions about urgent issues of belonging, Britishness, and Commonwealth identity. 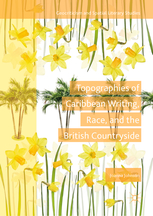 JOANNA JOHNSON is Director of Writing at the University of Miami, USA, where she has taught since 2000.  She has published chapters in the edited collections Geocritical Explorations (2011) and The Caribbean Short Story: Critical Perspectives (2011).  She also works and does research on scientific writing and the responsible conduct of research.