They say that “the apple doesn’t fall far from the tree.” I like to think that this McIntosh took a long roll into another orchard, but I’m not sure. I’ll let you judge.

This is a book about my family, the Novicks, who were at best described as “unusual”. It is about my complicated relationship with my father, whose closest friends just happened to be the bosses of the Genovese crime family. It is about my search to find myself after having spent a lifetime straddling two very distinct worlds: one as an upper-middle-class suburban girl who attended elite schools, ran in privileged circles, and identified strongly with her Judaism, and the other as a sort of Mafia princess whose upbringing gave access to another kind of elitism and privilege and landed me in front of a grand jury.

The story is told from my perspective. You are introduced to my father, Herbert Novick, born into a poor Jewish family in 1928 in the rough-and-tough Browsnville neighborhood of Brooklyn, made infamous as the home of Murder Inc. A job as teenager on the Brooklyn dockyards changed his fate when he met the men who became his lifelong friends—the men who then went on to become the capos of the powerful Genovese family. It was then that Herbie Novick morphed into “John” or “Johnny” or “Big John Novick”.

You will meet his bride, my stunning but deeply troubled mother, who was a formidable match in their explosive fifty-three-year marriage. Their genetic shortcomings and poor choices created a chaotic home for my sister and me, characterized by anger and fear, disappointment and confusion. I have been far luckier than my sister, who could never overcome the abuse of being used as a pawn in our parents’ battles.

Through chronological vignettes, both very funny and profoundly sad, I take you on my journey from early childhood in Brooklyn, to the wealthy Jewish ghetto known as the Five Towns of Long Island  where I grew up, to my adulthood, with its twists and turns, challenges and triumphs.

Beginning with a murder, I introduce you to the real-life Goodfellas who came in and and out of my life courtesy of my father’s role as a moneymaker for the Genovese family. We will visit the Mafia-infused worlds of the casinos of glitzy 1960s, 1970s and 1980s Las Vegas and Atlantic City; the boxing industry, Manhattan’s iconic Garment Center; the pre-MTV record industry, the restaurants where mob business deals were made and celebrated; and a corrupt boutique bank that was tied to a mob murder.

So join me, it’s quite a ride! 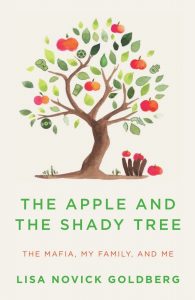 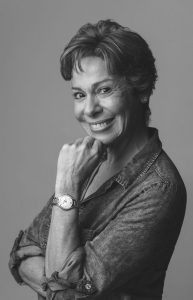 Lisa Novick Goldberg was born in Brooklyn and grew up in the Five Towns on Long Island. She raised her daughter, Maggie in Ardsley, NY. Lisa received her bachelor’s degree from Vassar College and her master’s degree in international affairs from Columbia School of International and Public Affairs. She now lives in Coconut Grove, Florida with her husband, Stan Blake.

The Apple and the Shady Tree is her first book.