In his own words, the improbable story of Luis Tiant, one of the most charismatic, accomplished Major League Baseball players of the 1960s and ’70s—a living link to the earliest, scariest days of Fidel Castro’s regime; a sports pioneer revered by Cubans on par with Jackie Robinson; a Boston Red Sox legend; and the most qualified pitcher not yet enshrined in the Baseball Hall of Fame

Luis Tiant is one of the most charismatic and accomplished players in Boston Red Sox history—a cigar-chomping maestro who was the heart and soul of Boston’s teams in the 1970s. In his white polyester uniform, with a paunch in his belly and a Fu Manchu mustache on his face, Tiant looked like a guy rolling out of bed for a Sunday-morning beer league. But nobody was a tougher competitor on the diamond, and few were as successful. There may be no more qualified pitcher not yet enshrined in the Baseball Hall of Fame.

His big-league dreams came at a steep price—racism in the Deep South and the Boston suburbs, fifteen years separated from a family held captive in Castro’s Cuba. But baseball also delivered World Series stardom and a heroic return to his island home after a half-century of forced exile. The man whose name—“El Tiante”—became a Fenway Park battle cry has never fully shared his tale in his own words, until now.

In Son of Havana, Tiant puts his huge heart on his sleeve and describes his road from fields strewn with rocks and rubbish in Havana to the pristine lawns of Major League ballparks. Ballplayers, family, and media also weigh-in—including a foreword by fellow 1975 hero Carl Yastrzemski and the first in-depth interview ever with Hall of Fame catcher Carlton Fisk on the magic behind the Boston batterymates.

Readers will share Tiant’s pride when appeals by a pair of U.S. senators to baseball-fanatic Castro secured freedom for Luis’ parents to fly to Boston and witness the 1975 World Series glory of their child. And readers will join the major league ballplayers who played a spring 2016 exhibition game in Havana, and witnessed Tiant—a living link to the earliest, scariest days of the Castro regime—throw out the first pitch. 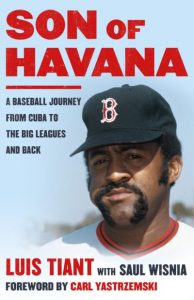 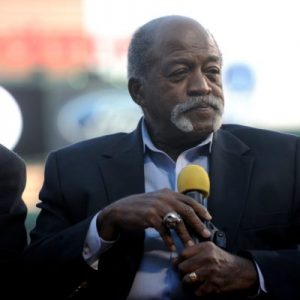 Luis Tiant has won more games than any other Cuban-born pitcher in the Major Leagues. He played in the MLB from 1964 to 1982, compiling a record of 229 wins and 172 losses to go along with a 3.30 career ERA, 49 shutouts, and 187 complete games. Born in Havana in 1940, the son of a legendary Negro League pitcher, he was 23 years old when he broke into the majors by shutting out the mighty Yankees—three years after leaving Cuba and being forced into exile in the aftermath of Fidel Castro’s bloody New Year’s Eve takeover in 1959. A star in the 1975 World Series for the Red Sox, Tiant’s unique windup, big-game heroics, and exuberant personality made him one of the most popular athletes in New England (and Cuban) sports history. Also a standout performer for the Indians and Yankees, he finally returned home to Havana in 2007, forty-six years after saying goodbye to his parents. Arguably the best pitcher not in the National Baseball Hall of Fame, Tiant divides his time between Maine, Florida, and Fenway Park.