Music Stories from the Cosmic Barrio: An Evening with Betto Arcos and Jackson Browne

An Evening with Betto Arcos

In conversation with Jackson Browne

Music Stories from the Cosmic Barrio

Music Stories from the Cosmic Barrio is a collection of 150 stories about music written for NPR, PRI’s The World, the BBC, and KPCC.  The book contains 12 chapters with multiple stories, each following a specific narrative focused on music: identity, learning, community-building, immigration, power (women); adversity, social unrest and violence; Cuba and the diaspora, Brazilian music, instruments, producers; place and nation. Each story is accompanied by a black and white photo of the featured artists – most of the photos in the book are by the author.

The book covers the rich and complex music from across Latin America, with an emphasis on music of diverse communities in the USA – Mexicans, Cubans, African-Americans, Armenians, and so on. There are also stories about musicians from Africa, the Middle East, and Europe.

At the heart of the narrative, this book also tells a personal story: Betto’s tireless, passionate search for stories that help to explain how diverse we are, and how music brings us together as a community.

Born in Xalapa, Veracruz, Mexico, Betto is a radio journalist and music curator based in Los Angeles, a regular contributor to NPR, BBC Radio 3 and KPCC, writing and producing stories about music from all over the world. 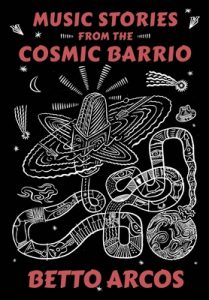 Betto Arcos is a radio journalist, curator and music promoter based in Los Angeles. Betto is a regular contributor to NPR, BBC Radio 3, and KPCC, writing and producing stories about musicians and music from all over the world. He is the Latin music curator at the San Jose Jazz Festival. In addition to his work in public radio, Betto has taught arts & culture and broadcast journalism at Loyola Marymount University. He developed a musical component for two different courses at Harvard University’s Divinity School, “Religion in the Latin American Imagination” (2002, 2011, 2015) and “Latinos Remaking America” (2014, 2016) taught by Prof. David Carrasco. Since 2014, Betto is a guest speaker at the State Department’s Foreign Service Institute, lecturing on Latin American Music to career diplomats. Starting in 2014, Betto has been traveling extensively in Latin America, offering workshops on music journalism, podcasting and the music industry at major international festivals, including: Asunción Jazz Fest, Feria Internacional de la Música de Guadalajara, Ecuador Jazz Fest, Panama Jazz Fest, Colombia al Parque, Bogotá Music Market, AM-PM in Havana. From 1997-2015, Betto created produced and hosted the daily music program “Global Village” on Pacifica Radio’s 90.7 FM-KPFK in Los Angeles. In 1993, Betto received his Bachelor of Science degree in Broadcast Journalism with honors from the University of Colorado-Boulder.

Jackson Browne has written and performed some of the most literate and moving songs in popular music and has defined a genre of songwriting charged with honesty, emotion and personal politics. He was inducted into the Rock and Roll Hall of Fame in 2004 and the Songwriter’s Hall of Fame in 2007.

Except for a brief period in NYC in the late 1960s, Jackson has always lived in Southern California. His debut album came out on David Geffen’s Asylum Records in 1972. Since then, he has released fourteen studio albums and four collections of live performances. Jackson is currently working on a new studio album, set for release in June 2021. On May 15, 2020, he released two new singles from the forthcoming record, “Downhill From Everywhere” and “A Little Soon To Say.”

Browne is known for his advocacy on behalf of the environment, human rights, and arts education. He’s a co-founder of the groups Musicians United for Safe Energy (MUSE) and Nukefree.org and a member of the Ocean advocacy group, Ocean Elders.

In 2002, he was the fourth recipient of the John Steinbeck Award, given to artists whose works exemplify the environmental and social values that were essential to the great California-born author. He has received Duke University’s LEAF award for Lifetime Environmental Achievement in the Fine Arts, and both the Chapin-World Hunger Year and NARM Harry Chapin Humanitarian Awards. In 2004, Jackson was given an honorary Doctorate of Music by Occidental College in Los Angeles, for “a remarkable musical career that has successfully combined an intensely personal artistry with a broader vision of social justice.”