In 2003, Tibetan lama Phakyab Rinpoche was admitted to the emergency clinic of the Program for Survivors of Torture at Manhattan’s Bellevue Hospital. After a dramatic escape from imprisonment in China, at the hands of authorities bent on uprooting Tibet’s traditional religion and culture, his ordeal had left him with life-threatening injuries, including gangrene of the right ankle. American doctors gave Rinpoche a shocking choice: accept leg amputation or risk a slow, painful death. An inner voice, however, prompted him to try an unconventional cure: meditation. He began an intensive spiritual routine that included thousands of hours of meditation over three years in a small Brooklyn studio. Against all scientific logic, his injuries gradually healed. In this vivid, passionate account, Sofia Stril-Rever relates the extraordinary experiences of Phakyab Rinpoche, who reveals the secret of the great healing powers that lie dormant within each of us. 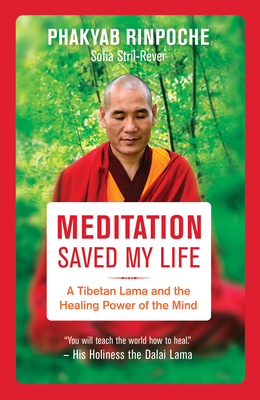 Phakyab Rinpoche, abbot of Ashi Monastery in Tibet, was recognized as a Reincarnate Lama by the Dalai Lama in 1994. A member of the Gelugpa order of Tibetan Buddhism, Rinpoche teaches spiritual healing throughout the United States, France, and the world. Sofia Stril-Rever is a spiritual teacher and writer based in Paris, France, dedicated to the promotion of inner healing, peace, and universal responsibility. She has coauthored three books with the Dalai Lama, including his memoir My Spiritual Journey, and released Dakini, a CD of healing mantras.