When Philip IV of Spain died in 1665, his heir, Carlos II, was three years old. In addition to this looming dynastic crisis, decades of enormous military commitments had left Spain a virtually bankrupt state with vulnerable frontiers and a depleted army. In Silvia Z. Mitchell’s revisionist account, Queen, Mother, and Stateswoman, Queen Regent Mariana of Austria emerges as a towering figure at court and on the international stage, while her key collaborators—the secretaries, ministers, and diplomats who have previously been ignored or undervalued—take their rightful place in history.

Mitchell provides a nuanced account of Mariana of Austria’s ten-year regency (1665–75) of the global Spanish Empire and examines her subsequent role as queen mother. Drawing from previously unmined primary sources, including Council of State deliberations, diplomatic correspondence, Mariana’s and Carlos’s letters, royal household papers, manuscripts, and legal documents, Mitchell describes how, over the course of her regency, Mariana led the monarchy out of danger and helped redefine the military and diplomatic blocs of Europe in Spain’s favor. She follows Mariana’s exile from court and recounts how the dowager queen used her extensive connections and diplomatic experience to move the negotiations for her son’s marriage forward, effectively exploiting the process to regain her position.

A new narrative of the Spanish Habsburg monarchy in the later seventeenth century, this volume advances our knowledge of women’s legitimate political entitlement in the early modern period. It will be welcomed by scholars and students of queenship, women’s studies, and early modern Spain. 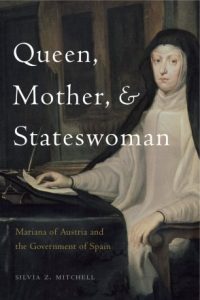