“At once a tender coming-of-age story and a deeply personal look at a young woman making sense of the world against a chaotic and peripatetic childhood.”—Katie Couric

As an apple-cheeked bubbly child, Julianna was bestowed with the family nickname “Sunshine Girl.” Shuttled back and forth between her divorced parents, often on different continents, she quickly learned how to be of value to her eccentric mother and her absent father. Raised in fairly unconventional ways in various homes in Paris, England, New York, and New Hampshire, Julianna found that her role among the surrounding turmoil and uncertainty was to comfort those around her, seeking organization among the disorder, making her way in the world as a young adult and eventually an award-winning actress.

Throughout, there were complicated relationships, difficult choices, and overwhelming rejections. But there were also the moments where fate, faith, and talent aligned, leading to the unforgettable roles of a lifetime, both professionally and personally—moments when chaos had finally turned to calm.

Filled with intimate stories and revelatory moments, Sunshine Girl is at once unflinchingly honest and perceptive. It is a riveting self-portrait of a woman whose resilience in the face of turmoil will leave readers intrigued and inspired. 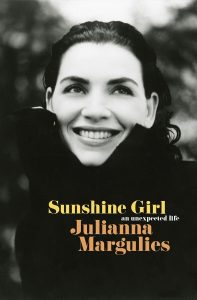 As an Emmy, Golden Globe, and Screen Actors Guild award winner, Julianna Margulies has achieved success in television, theater, and film. Margulies starred as Alicia Florrick on the long-running hit CBS show The Good Wife, which she also produced, and is also well known for her role as one of the original cast members of ER. More recently, Margulies has starred on critically acclaimed series including The Morning Show, Billions, and The Hot Zone. She has been involved with Project ALS and Erin’s Law and is also a board member of the New York City–based MCC Theater company. She resides in New York City with her husband and son.

He has received over forty awards for his humanitarianism and social activism, three honorary doctorates, both the Great Scot and Icon of Scotland awards from his homeland and was made an OBE (Officer of the British Empire) for his contributions to the arts and LBGT equality by the Queen, whose portrait was taken down when his was unveiled at the Scottish National Portrait Gallery in 2014.

Once you have registered on Eventbrite, you will receive an email from us approximately

20 minutes before the event starts with a unique link for you to join.

The purchase of this ticket admits (1) one person into the virtual event and includes (1) one copy of Sunshine Girl (Ballantine Books, $28). Please note that a fee of $6 is included for U.S. domestic shipping of the book.

When completing your order, please make sure that you include your complete shipping address and phone number. The book will be shipped to you following the event.

Please note: Due to the pandemic the post office is being challenged by increased volume, staffing issues, and safety measures. We cannot guarantee the exact date of delivery but will do our best to make it as swift as possible.

The purchase of this ticket includes access to the virtual conversation as well as one (1) copy of the book, Sunshine Girl (Ballantine Books, $28 USD + tax).

**Please Note: This option includes a flat rate international shipping fee of $25 USD for all overseas orders. Due to the pandemic, delivery timelines will vary. Please be advised that we cannot guarantee when you will receive the book, and we thank you for your understanding.

When completing your order, please make sure that you include your complete shipping address and phone number.

All books will be shipped AFTER the event.

When completing your order, please make sure that you include your complete shipping address and phone number.

Please note: Due to the pandemic the post office is being challenged by increased volume, staffing issues, and safety measures. Most orders within the U.S. deliver in about 10 business days from the date the book ships. International orders usually take longer and vary depending on the country of destination. We cannot guarantee the exact date of delivery, however, will do our best to make it as swift as possible. Thank you for your understanding.