The Idea of You: An Evening with Robinne Lee and Meena Harris

An Evening with Robinne Lee

In conversation with Meena Harris

The Idea of You: A Novel

Solène Marchand, the thirty-nine-year-old owner of an art gallery in Los Angeles, is reluctant to take her daughter, Isabelle, to meet her favorite boy band. But since her divorce, she’s more eager than ever to be close to Isabelle. The last thing Solène expects is to make a connection with one of the members of the world-famous August Moon. But Hayes Campbell is clever, winning, confident, and posh, and the attraction is immediate. That he is all of twenty years old further complicates things.

What begins as a series of clandestine trysts quickly evolves into a passionate and genuine relationship. It is a journey that spans continents as Solène and Hayes navigate each other’s worlds: from stadium tours to international art fairs to secluded hideaways in Paris and Miami. For Solène, it is a reclaiming of self, as well as a rediscovery of happiness and love. When Solène and Hayes’ romance becomes a viral sensation, and both she and her daughter become the target of rabid fans and an insatiable media, Solène must face how her romantic life has impacted the lives of those she cares about most. 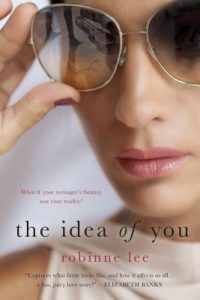 The Idea of You is actor, writer, and producer ROBINNE LEE’s debut novel. A graduate of Yale University and Columbia Law School, Robinne was born and raised in Westchester County, New York. Robinne has numerous acting credits in both television and film, most notably opposite Will Smith in both Hitch and Seven Pounds and as Ros Bailey in Fifty Shades Darker and Fifty Shades Freed. She lives in Los Angeles with her husband and two children.

Meena Harris is one of the most powerful and dynamic young leaders in America. As the founder of the groundbreaking Phenomenal brand, she is a respected entrepreneur and is recognized as an influential voice for women’s equality. Meena is also an attorney with extensive experience in consumer protection, data privacy, and cybersecurity. A #1 New York Times bestselling author, Meena released her latest book, Ambitious Girl, on January 19, 2021. Meena has been featured in The New York Times, The Washington Post, Harper’s Bazaar, Adweek, and more. She is a graduate of Stanford University and Harvard Law School, and currently resides in San Francisco with her partner and two daughters.