A few weeks after Hurricane Andrew wreaks devastation and havoc across South Florida, a father and his infant daughter crash their car into a canal. The man’s body is recovered, but his baby girl is never found. Twenty-three years later, after reports of alleged sightings of the girl, police reopen the case. Detective Maria Duquesne has been assigned to the case, but she has very little in the way of clues. Is it really possible that the girl has not died? Or is this simply the persistence of a desperate mother who will not accept the death of her daughter? Uva de Aragón’s novel – in an English-language translation by Jeffrey C. Barnett and Kathleen Bulger-Barnett – provides a multifaceted portrait of the Latino communities of Miami and Hialeah, creating an exciting thriller that will appeal to readers who enjoy mysteries with female sleuths. 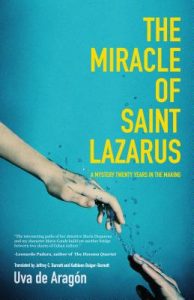 DR. UVA DE ARAGÓN has published a dozen books of essays, poetry, short stories, and the novels Memoria del Silencío (2002/2010), translated as The Memory of Silence (2014), and El milagro de San Lázaro (2016), which is now offered in its first translation into English. Some of her short stories and a play have also been translated and appear in textbooks and anthologies such as The Voice of the Turtle, Cuba: A Traveler’s Literary Companion, Cubana, and Cuban-American Theater. The Miracle of Saint Lazarus is the newest soon-to-be bestseller in her distinguished literary career. Until her retirement in 2011, she served as Associate Director of FIU’s Cuban Research Institute.