In the Land of Good Living: A Journey to the Heart of Florida

In the summer of 2016, Kent Russell–broke, at loose ends, hungry for adventure–set off to walk across Florida. Mythic, superficial, soaked in contradictions, maligned by cultural elites, segregated from the South, and literally vanishing into the sea, Florida (or, as he calls it: “America Concentrate”) seemed to Russell to embody America’s divided soul. The narrative overflows with historical detail about how modern Florida came into being after World War II, and how it came to be a petri dish for life in a suddenly, increasingly diverse new land of minority-majority cities and of unrivaled ethnic and religious variety. It is a book that is wildly vivid, encyclopedic, erudite, and ferociously irreverent–a deeply ambivalent love letter to his sprawling, brazenly varied home state. 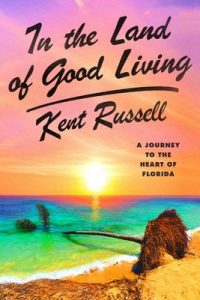 KENT RUSSELL’s essays have appeared in The New Republic, Harper’s Magazine, GQ, n+1, The Believer, and Grantland. He is the author of I Am Sorry to Have Raised A Timid Son. He lives in Brooklyn, NY.

KAREN RUSSELL won the 2012 and the 2018 National Magazine Award for fiction, and her first novel, Swamplandia! (2011), was a finalist for the Pulitzer Prize. She has received a MacArthur Fellowship and a Guggenheim Fellowship, the “5 under 35” prize from the National Book Foundation, the NYPL Young Lions Award, the Bard Fiction Prize, and is a former fellow of the Cullman Center and the American Academy in Berlin. She currently holds the Endowed Chair at Texas State University’s MFA program, and lives in Portland, Oregon with her husband and son.