An Evening with Sarah Henning

In conversation with Romina Garber

The Princess Will Save You

The Princess Will Save You is a YA fantasy adventure inspired by The Princess Bride, in which a princess must rescue her stable boy true love, from the acclaimed author of Sea Witch, Sarah Henning.

When a princess’s commoner true love is kidnapped to coerce her into a political marriage, she doesn’t give in—she goes to rescue him.

When her warrior father, King Sendoa, mysteriously dies, Princess Amarande of Ardenia is given what would hardly be considered a choice: Marry a stranger at sixteen or lose control of her family’s crown.

But Amarande was raised to be a warrior—not a sacrifice.

In an attempt to force her choice, a neighboring kingdom kidnaps her true love, stable boy Luca. With her kingdom on the brink of civil war and no one to trust, she’ll need all her skill to save him, her future, and her kingdom. 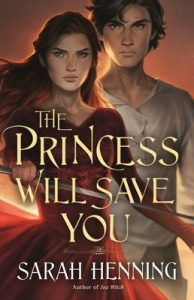 Sarah Henning is the author of Sea Witch, Sea Witch Rising, Throw Like A Girl, and The Princess Will Save You. She is a recovering journalist who has worked for Palm Beach Post, Kansas City Star, and Associated Press, among others. When not writing, she runs ultramarathons, hits the playground with her two kids, and hangs out with her husband Justin, who doubles as her long-suffering IT department. She can be found at https://www.sarahhenningwrites.com/

Romina Garber is a New York Times and international bestselling author. Originally from Argentina, she landed her first writing gig as a teen—a weekly column for the Miami Herald that was later nationally syndicated—and she hasn’t stopped writing since. Her books include Lobizona. When she’s not working on a novel, Romina can be found producing movie trailers, taking photographs, or daydreaming about buying a new drum set. She is a graduate of Harvard College and a Virgo to the core.